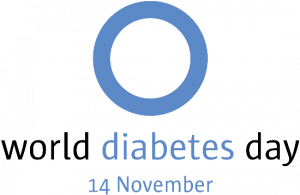 This year’s theme is “Test 2 Prevent”. Th aim is to encourage people to get screened. According to the International Diabetes Federation (IDF) half of adults with diabetes are undiagnosed. The old adage that prevention is better than the cure is never truer than it is for Type 2 diabetes. Early identification followed by a suitable intervention can prevent serious complications later on.

Up to 70% of Type 2 diabetes can be prevented or delayed by adopting healthier lifestyles, the equivalent of up to 160 million people by 2040 (Source: www.diabetesatlas.org).

What are the risks?

If untreated there are a number of serious potential complications*. In some countries diabetes is the leading cause of blindness, lower limb amputation, kidney failure and cardiovascular disease. It is important to take any opportunity to prevent this. The earlier the better.

Who should get checked up?

Although there aren’t always obvious symptoms early on there are a number of indicators that shouldn’t be ignored*. These include feelings of tiredness, more frequent urination, increased thirst, and more regular (or longer lasting) infections. Rapid weight loss can be a sign of Type 1 diabetes. People who are overweight or obese are at increased risk* of Type 2 diabetes. You can use the Diabetes UK online calculator to test your own risk, but it is worth anyone who has the opportunity getting checked up!

So what is the plan?

To mark World Diabetes Day the IDF’s aim is for more than one million people to be screened for diabetes in the month of November. To measure this they’re asking people to take a selfie during their screening using the World Diabetes Day app and to share it on social media using the hashtags #WDD, #Test2Prevent and #EyesOnDiabetes! In addition to increasing the number of people getting screened it is important to increase awareness of diabetes and its complications. Sharing your selfies, and increasing awareness of the IDF’s blue circle as the global symbol for diabetes, can help to achieve this.

As well as the World Diabetes Day efforts there are some other fantastic programmes ongoing in the UK. Such as the National Diabetes Prevention Programme and NHS Health Checks, which will hopefully help to address the problem.

The fight against diabetes is not just a one day or a one month battle! In light of the current epidemic of Type 2 diabetes and the potential dangers, why not take a bit of time to get yourself checked?

*More information about the risk factors can be found on the IDF website.