Pretty much every week during our blogs, and during the programmes themselves, we use the phrase “one size doesn’t fit all”. This might seem like a bit of a cliché, but in reality it is a really important message for anyone looking to make some changes to their lifestyle. Nutritional advice in the UK is based around the Eatwell guide (1) which suggests a similar diet for everyone, based on starchy carbohydrates with a low fat intake. For a number of reasons different approaches may be a better fit for different people however, and something that works successfully for one person may be doomed to fail for another. This week’s blog takes a look at why.

To demonstrate the point of how we all respond differently to the same foods, a recent study  looked at how people’s blood glucose changed after they ate 50 grams of carbohydrate (2). Now if everybody responded to food in the same way then it stands to reason that the blood glucose change would be the same (or at least very similar) for everyone when they were given an identical meal. But what was actually seen was that on average there was a 25% difference in the response, whilst for some people the change in blood glucose was up to 77% different to other participants! This shows that there can be a large difference in the way a single food item (in this case it was white bread in part of the study and pure glucose in another part) affects different people.

As a result the use of tools such as the glycaemic index- which is supposed to tell us how much/how quickly eating carbohydrates will affect us- may not be a useful measure.

Another piece of research showed a similar thing, with huge differences in the response to meals in a group of 800 people (3). The researchers used the data they collected to successfully predict how the participants, and 100 new ones, blood glucose would be affected by certain meals. Foods that appeared in a “good” diet for some people appeared in a “bad” diet for others! This study is explained in a brilliant little video here. The conclusion from this study was that general guidelines around diet may not be useful for lots of people.

So why is there a difference?

There are a number of different biological factors that play a part, so it wouldn’t be possible to fully discuss them all in this blog (partly because it would be too long, and partly because I don’t understand it all!). As well as simple factors like our body size and our sex affecting this there are some more complex factors to consider, and they are not all fully understood. Factors that seem to play an important part however include genetics, the microbiome, and insulin resistance.

It is generally recognised that genetic differences play a big role in most of what makes us all different, and there is evidence to suggest that this includes an impact on how our body responds to eating different foods. For example, a gene variant has been identified that influences whether a diet that is high in fat is more effective for weight loss in an individual than a diet that is low in fat (4). Although there is not currently enough evidence to confidently design individual diets around our genes (5) it is still likely that differences can play an important part. There is also research showing that our behaviours can have an effect on the expression of certain genes however (6), for example the effect of a genetic variation associated with obesity was reduced when people were physically active (7). This is reassuring as it suggests we are not a hostage to our DNA!

Research about the human microbiome is quite an exciting area (if you’re into that kind of thing) as there is still a lot that we don’t know. The microbiome is the collective name for all of the bacteria that lives inside us. It’s often quoted (including in the video I linked to above) that the number of these microbial cells is 10-100x more than the number of human cells, though more recent evidence suggests that there is probably a similar number of each (8). That is still a lot of “us” that isn’t really “us” though, and the microbiome has a massive effect on our health; including how our body responds to eating certain things (9). The study mentioned above by Zeevi et al (3) even found that differences in the microbiome was one of the most important factors in predicting how our body responds to food. Complicating things further, what we eat has an influence on the diversity and make up of our microbiome (10) as well as our microbiome having an effect on how our body deals with what we eat- so these relationships work in both directions! Matt will be talking about the microbiome a little more in next week’s blog, so I’ll move on now before I steal his thunder.

Another potentially important factor, particularly in relation to our tolerance for carbohydrates, is our insulin sensitivity. Insulin is a hormone that plays an important role in how we store energy. On of insulin’s roles is essentially to act as a key to unlock our cells, letting the glucose in to be used for energy. As a result, when someone has poor insulin sensitivity (i.e. they are insulin resistant) when they eat a lot of carbohydrate the glucose stays in their blood rather than being moved into the cells, because the key doesn’t open the door properly. Without enough glucose in the cells we don’t get enough energy, so our body tries to get us to take in more by triggering feelings of hunger (see figure 1). Insulin resistance is a particularly important factor in people with Type 2 diabetes and is present in many people who are overweight or obese.

A second role of insulin is to promote the storage of fat. So when our insulin levels are high any fat in our system, either that which we’ve consumed or that which has been made IN our body from excess carbohydrate, is likely to be stored rather than used for energy. So eating more carbohydrates than our body can handle, which might be a lot for someone with good insulin sensitivity but not much for someone who is insulin resistant, triggers our insulin levels to rise and makes it difficult to burn fat and lose weight (also in figure 1!).

The differences in carbohydrate tolerance can be compared to differences in capacity for consuming alcohol. If you go to a bar with a friend who can drink like a fish then trying to keep pace with them may well not end well for you (at the very least there would likely be a spinning room and a sore head in your future). Similar can be said for carbohydrates- the amount one person can have without negative affects might be very different to what someone else can tolerate. 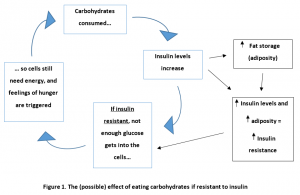 As well as the biological differences it is also important to consider differences in peoples’ lifestyles. This influence is sometimes overlooked in the search for a biological explanation for what causes certain diseases and weight gain. There are a variety of different lifestyle factors which can have an effect, including:

* Activity levels: Somebody who is always on their feet or does a lot of physical activity has different nutritional requirements to someone with a sedentary lifestyle, for example they require more energy and may have a greater need for protein (for the repair of muscles etc.).

* Social Life: How easy it is to stick to certain dietary approaches may not be completely in our own hands. The people we spend time with and the activities we take part in can also have a big effect. If you have a social life with a lot of events that involve food then the timing and setting of these events can have an effect. If you’ve adopted an intermittent fasting approach for example the last thing you want is to be sat in a restaurant where all your friends/family/colleagues are enjoying a meal on a day you’ve allocated as a fast day! Although you should pick an approach to suit you and not just to fit in with others, it is always worth considering such practicalities.

* Personal and Religious Beliefs: Although there is no reason different approaches can’t be adapted for most beliefs, this might affect the specifics. For example, a low carbohydrate diet might include a lot of eggs and cheese with moderate amounts of meat for some people; whereas for a vegan person there would likely be a higher amount of legumes, avocados and nuts to replace the animal products.

* Tastes: Trying to follow a diet that includes a lot of things you simply don’t like (or that doesn’t have a lot of things you do likes) means a reliance on willpower. For example if a friend has had success following a Mediterranean diet including a lot of olive oil, but you don’t like olive oil, then you probably won’t enjoy your food if you tried to copy them! This approach would therefore not be sustainable. Choosing a dietary approach that you can actually enjoy is much more likely to result in long term adherence, which is essential.

* Allergies/intolerances: There are a number of people who are intolerant or allergic to certain foodstuffs. This is clearly going to influence which approach is most suitable for the individual. For example, a low fat diet high in starchy carbohydrates may pose challenges for someone with a gluten intolerance; whilst a low carbohydrate diet filled with dairy products will be unsuitable for someone with a sensitivity to lactose. This doesn’t rule out any approach for any individual, but the way they follow it will have to be tailored to them. Other medical conditions can also influence the tolerability of having a high amount of certain foods, so it is worthwhile discussing any intended changes with your GP or a suitably qualified professional in this case.

Last week’s blog talked about different dietary approaches, and we’ve also added a section to our website summarising some of the main ones. Each of these approaches has a line of people ready to criticise or promote it, but there is evidence for the success of multiple different approaches (for example there is evidence for the possible benefits of the four dietary approaches we include on our programmes in the relevant section of our website- linked above).

The suitability of each approach for a given individual will be affected by a number of different things, not limited to those discussed in this blog. These individual differences do mean that any single dietary recommendation probably won’t be suitable for everyone. The 2015 NICE guidelines for Type 2 diabetics do acknowledge that people have different tolerances for carbohydrate which should be considered (11). Hopefully in the future other dietary guidelines will also provide scope for this kind of individualisation.

Practically speaking, the two most important factors when choosing our own approach are:

* Are we likely to continue with it? This will mainly come down to whether we actually enjoy following it and if it fits into our lifestyle.

* Are we meeting our own health targets? This might be in relation to controlling weight or blood glucose, but should also ensure that there are enough essential vitamins and minerals included to avoid other negative health consequences!

If the answer to both of these questions is “yes” then anyone who criticises what you are doing (and there will always be someone happy to do so) is, quite frankly, wrong!

The bottom line really is that one size doesn’t fit all!