Wholegrains, processed carbs and health. Going against the grain?

In the world of diet and health there is currently something of a disagreement around the possible harms and benefits of many different foods. One category of food that has found itself at the centre of some of this controversy is the humble grain. As with many of the dietary debates currently ongoing it is often difficult to know what to believe, so in this week’s blog we take a look at the subject. Are grains grrrrreeaaaaat, or should we say cheerio?

What’s in a grain?

A grain by any other name would taste as sweet, or so Shakespeare wrote. But not all grains are equal in the foods we encounter every day. The way nature intended them, as wholegrains, grains have three parts:

3. The Endosperm: Provides energy, as well as some protein and some b-vitamins.

Now this complete package provides us with energy, a means to delay the release of this energy, and nutritional value. In this form grains can make up a part of a healthy diet for many people; as discussed subsequently. The primary issue however is that a large proportion of the grain-based products available today do not include wholegrains, but instead include grains that have been processed in some way.

What’s the problem with processed grains?

Processed, or refined, grains are very different in form to the naturally occurring wholegrain they’re derived from. This process removes the bran and the germ, so only the energy-dense endosperm remains. The removal of the germ means the grain has massively reduced nutritional value. The removal of the bran reduces the fibre content of the grain and means the carbohydrate is broken down into glucose and absorbed much faster.

The end result is a product that causes a fast increase in blood glucose, raised insulin levels, and all the negative health consequences associated with this. The increased rate at which the grain breaks down also means it doesn’t make us feel full for as long, so can lead to increased food consumption and possible weight gain. Modern milling processes using machinery mean processed grains are much finer than historically stone-milled varieties too, though this isn’t the only reason grain-based products now are more detrimental to health than those from the past.

Wholegrains aren’t what they used to be…

Another important factor in building up a picture of the health qualities of grains is how the methods in growing them have changed during relatively recent history. In order to address issues with growing populations and worldwide famines, techniques were developed to increase the yield of wheat plants. These efforts were highly successful, and even resulted in a Nobel Prize for one of the pioneers in the field.

Dwarf and semi-dwarf wheat varieties, which were the product of these efforts and subsequent genetic modifications, now make up almost the entire supply of wheat worldwide (99% according to Jason Fung in his brilliant book, “The Obesity Code”). Although they provide a much higher yield (great for those looking to make a profit from wheat-based products), they also unfortunately have a much lower nutritional value. So even the “healthy” wholegrain is not what it used to be! 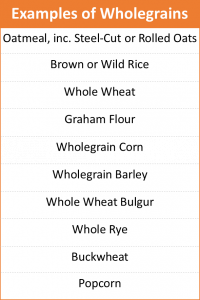 What are the benefits of wholegrains?

Cochran systematic reviews have found that increasing intake of wholegrain foods results in reduced risk of developing Type 2 diabetes1 and is associated with a reduced risk of cardiovascular disease2; at least when compared to the consumption of refined grains. Both of these reviews were limited by possible biases associated with who had funded the individual studies however, with the authors of each concluding the studies were of poor quality overall. Cochrane reviews are the gold-standard of evidence, but are still limited by the quality of studies that are available to be reviewed! Most of the studies included in these reviews were also on oats, so it is possible any benefits seen might be specific to oats alone rather than related to all wholegrains.

Other meta-analyses (a method of pooling the results from multiple studies) have also found a reduced risk of Type 2 diabetes3,4 in people who consume more wholegrains; as well as an association between increased wholegrain intake and reduced risk of: cancer, respiratory disease, infectious diseases, coronary heart disease, stroke, and other cardiovascular diseases.4 As with a lot of the available information in the nutrition research world much of the data on wholegrains is from observational research, and therefore has some limitations. These limitations were discussed in a previous blog, but of particular relevance is that this type of study makes it difficult to pick out the effects of an individual food over the potential effects of all the other differences in peoples’ lifestyles. There is however plenty of evidence suggesting that wholegrains can have an important beneficial effect on our health, despite their reduced nutritional value compared to years gone by.

So should we all be filling up on wholegrains?

This is a difficult one to answer in some ways, but ultimately it is the most important question. As with most things that are diet related it varies from individual to individual (one size doesn’t fit all!). Some will be able to include wholegrains as part of their diet with no issues, and may experience some health benefits. For others this may not be the case however. Those with insulin resistance for example (most people with Type 2 diabetes and many who are overweight or obese) may struggle to manage their blood glucose levels and/or weight if they include lots of wholegrains in their diet, but even for these people they are still a better option than refined/processed carbohydrates.

If you want to include wholegrains and you don’t experience any negative effects from having them, then there is no reason to stop; no matter what advice others might give you!

An area of practical relevance when it comes to grains: what is the difference between the millions of different types of bread available? The first thing that everyone knows, is that brown bread is healthier than white bread. Obviously. Except that when it comes down to it the only real difference between them is the colour (and the taste I suppose, as children the world over will tell you).

The flour used in brown bread is as highly refined as the flour used in white bread, so the effect on our body when we digest them is very similar. Wholemeal bread is pretty much the same too (as you can see in the glycaemic index table, which tells us how quickly foods affect our blood glucose). There are other factors to consider, for example seeded breads might have more nutritional value, but for many people the effect of the carb content on blood glucose levels is a primary concern. However you look at it, the days of brown bread being promoted as the healthier alternative should be, well, brown bread. 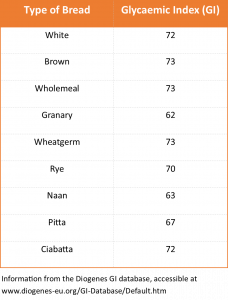 What about breakfast cereals?

We’re often told breakfast is the most important meal of the day, which is just not true. If you do want to have breakfast though, and cereal is your weapon of choice, there are still better and worse choices.

It’s the same old story, broadly speaking; the more highly processed a cereal, the less nutritional value it is likely to have and the worse the impact on your blood glucose (and likely weight) will be. Rolled porridge oats are therefore a better choice than cornflakes, and muesli a better option than almost everything that is aimed at children (which is quite worrying really…). Shredded Wheat and Weetabix are also towards the better end of the continuum, but the best choice if you really want breakfast…. have some eggs!

Refined grains have little nutritional value and can cause rapid increases in blood glucose levels. Refined grains should therefore be avoided as much as possible, as should most processed foods! When it comes to grains wholegrains are king. There are a number of positive effects on health associated with wholegrains, so as long as there are no signs of negative effects from consuming them there is no reason you can’t harvest the benefits of including them in your diet.

As with all our blogs and other work we’d love to hear your thoughts and feedback, so feel free to comment below, drop me an e-mail at sean.wheatley@xperthealth.org.uk or tweet us/me at @XPERTHealth or @SWheatley88.