Insulin: The cause of and solution to all of life’s problems 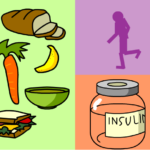 The Role of Insulin

As discussed a fortnight ago counting calories does NOT work. The reason for this is clear. Human physiology is too complicated to be simplified as calories in vs calories out. Obesity is a hormonal condition driven by what causes hunger, satiety and the fate of nutrients once ingested (1). Arguably the key player in all of this is insulin.

Insulin is an anabolic hormone released by the pancreas following eating. The main macronutrient to drive insulin levels up is carbohydrate (CHO). The amount of insulin secreted correlates with the amount of CHO consumed. The more CHO consumed the higher insulin levels go. Insulin’s role is centred on the storage of nutrients (3). Insulin promotes the storage of nutrients and prevents the utilisation of stored energy. Essentially when insulin levels are high one is exceptionally effective at storing fat and incapable of utilising it.

Even in a state of a 300kcal deficit individuals when given insulin gained large amounts of weight over a six month period. The predicted weight loss based on calories in vs out should have been 6.5kg (14.4lbs). However, due to the elevated insulin the opposite happened. An average of 8.7kg (19.2lbs) was gained! (4).

When CHO is consumed it mostly converts into glucose. When glucose levels are high, insulin is released to unlock the cells to allow the glucose to enter. Here it may be used as energy or stored as glycogen (a similar process happens in the liver), insulin effectively acts as a key (5).

See below for a graphical explanation of insulins role on fat regulation through insulin:

Consistently high levels of insulin can cause overweight cells

Consistently high levels of insulin drives the body to store fat as adipose tissue and generate triglycerides from CHO in the liver, a process called de novo lipogenesis (7). This causes cells to become overweight. This makes it more difficult for the insulin to do its job (going back to the lock and key analogue the fat partly blocks up the lock) (8). So what does the body do? It produces more insulin to do the same job.

Consider what happens when you take antibiotics. After a while you become less capable of reaping their benefits. So the dose is increased to have the same effect which a lesser dose accomplished previously. You develop a resistance to the antibiotic. You see where I’m going with this. Over time consistently elevated levels of insulin (hyperinsulinaemia) inevitably lead to a resistance to the insulin. When acutely administered through injections it is scary how quickly insulin resistance can develop. After just four days of chronically high insulin levels, insulin resistance can be clinically recognised (9).

Insulin resistance is a metabolic reaction which occurs when excessive amounts of insulin are continually present in circulation (4). This leads to hyperinsulinaemia. Which is directly associated with obesity. It is also a risk factor for the development of Type 2 diabetes (5) and cardiovascular disease (10). High insulin levels are also linked to higher hepatic (liver) fat content. This leads to the development of a ‘fatty liver’ which can lead to non-alcoholic fatty liver disease (11). This trend also seems to follow with other age related diseases such as Type 2 diabetes, stroke, hypertension and CHD (12).

Insulin resistance is directly associated with all factors within the metabolic syndrome complex (13).

High levels of insulin resistance and hyperinsulimnia ultimately cause fat gain and decrease fat utilisation regardless of whether an individual is consuming less calories than they are expending. Their body is effectively overly proficient at storing consumed nutrients as fat and under efficient at using adipose tissue as an energy source. Consequently this leads to weight gain and related adverse health conditions.

How to correct the insulin resistance?

So now the ultimate question – How to correct the insulin resistance? The answer deemed accurate enough to base most current medications on is to reduce blood glucose levels. This is pharmaceutically done through injecting insulin. Or through drugs aimed to increase insulin secretion e.g. sulphonylureas. Anyone living with Type 2 diabetes at a severe level may currently be injecting insulin and experiencing more controlled blood glucose as a result. To be fair, injecting insulin does help regulate blood glucose levels (14) but what happens overtime? The insulin dose needs to be increased to sustain the same benefits (15). Sound familiar? Yup that’s insulin resistance getting steadily worse. The most utilised method to help manage Type 2 diabetes was to worsen it, the word ironic springs to mind!

So how really to reduce insulin resistance? Attack the problem from the source, THE INSULIN! For this we need to address what elevates insulin. As discussed at the start of this blog the main drivers are consuming CHO (particularly refined CHO).

As a result arguably the most applicable points to address the above would be:

Combining a low CHO diet with intermittent fasting may be the best way to improve insulin sensitivity. In addition to this increasing physical activity will help the muscle cells fight off insulin resistance through enhancing the sensitivity to insulin following exercise.

If you suffer from insulin resistance for a long period of time do not be put off. It is absolutely reversible. It may just take slightly longer, depending how hard you hit it back!

Consider the body as a balloon. Non-insulin resistant individuals are untouched balloons. As Insulin resistance gets worse more air is pumped into the balloon. The larger the balloon the more time it takes to deflate. Yet it is always doable.

To conclude, reducing insulin levels may just be the perfect treatment to a lot of adverse health conditions. For those visual learners out there, see below for this blog summarised as part of a flow chart: 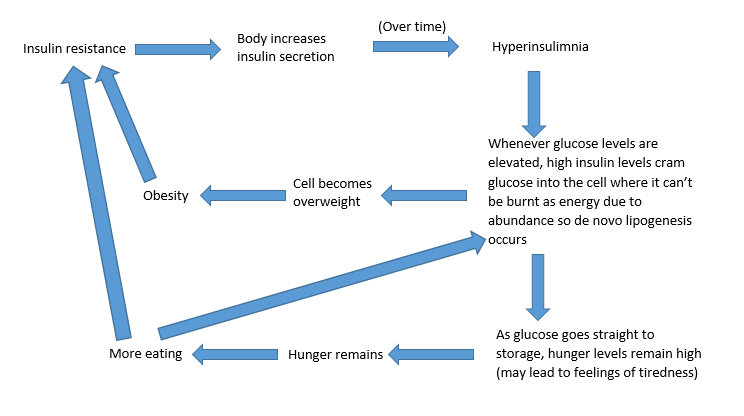