How can poor sleep quality and stress make you fat? 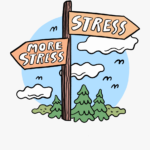 Can Stress and Sleep Affect Weight?

Have you ever heard that high levels of stress and/or poor sleep quality can lead to weight gain and questioned how this may be possible? In this blog we’ll  discuss how stress and sleep affects weight and overall health.

If we are in agreement that obesity is a hormonal condition predominantly caused by excessively high insulin levels (hyperinsulinaemia) then it only makes sense to question what other hormones may be involved. There is indeed a hormone which is regulated by stress and sleep that is directly associated with insulin secretion, this is called cortisol.

Cortisol is a steroid hormone released from the adrenal glands when one is under stress or in a state of low-blood glucose concentrations. With help from the sympathetic nervous system cortisol mediates the ‘fight or flight’ response. So the release of cortisol is essentially a physiological response to apparent threats. Elevated cortisol levels leads to:

The release and clearance of cortisol is very rapid, it is a hormone intended to quickly increase blood glucose levels to increase instantaneous energy availability to bypass or combat the immediate threat.

Consider this. In ancient Roman times, when a Centurion was leading his centuries into battle, the sudden release of cortisol would have put-in-place all the essential physiological responses to combat the opposition. I can’t imagine fleeing would be an option. The cortisol would prime him for action, alertness increases and the need for sleep is reduced.

This amplified blood glucose was utilised quickly through vigorous activity. Once the threat had passed (battle was over) cortisol levels would drop back to normal, as would blood glucose levels (proving our example Centurion survived of course!).

This pattern is how the flow of cortisol should be maintained.

In present times, for most there are few situations that require such a rapid increase in cortisol. Yet levels may still become elevated. But how?

Everyday stressors lead to increased cortisol levels. Some examples may be marital stress, arguments with partners, family, friends, job stresses, sleep deprivation etc. These stressors would rarely be followed by vigorous activity to clear the excess glucose and thus reduce cortisol levels. So what happens? The cortisol levels remain high, as does blood glucose. See below for a graphical representation of this: 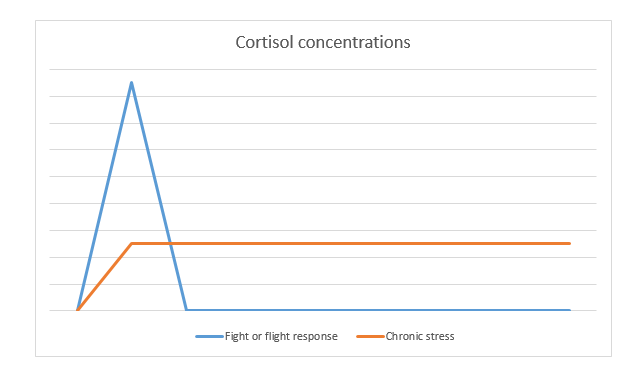 As previously stated the persistently increased cortisol levels as a result of everyday stress leads to consistently elevated blood glucose which of course leads to increased insulin levels. Ultimately high cortisol levels cause high insulin levels (1, 2). It has been shown for every unit of free cortisol increased, insulin increased by 9.7mU/l (3) and elevated cortisol levels are directly linked to the development of insulin resistance (4). Cortisol’s association with insulin is clear and as a result and as expected, so is its correlation with higher BMI and body weight (5) as supported by clinical observations (6). Further correlations have been shown between stress-related cortisol secretion and central obesity (7). Additionally to pharmaceutically support this the drug prednisone is a synthetic cortisol and one of its main side effects is weight gain.

Cortisol increases alertness and decreases the ability to sleep. As a result sleep quality is negatively affected which in-turn may increase cortisol levels further (8, 9). A vicious cycle becomes apparent:

Poor sleep quality has also been associated with impaired fasting glucose (10) and counterproductive properties to losing weight. Such as an unfavourable fat to fat-free mass loss (11) and increases in hunger hormones (12), making weight loss more difficult.

Hopefully now you see why some people say poor sleep quality and high stress levels may lead to weight gain. So this brings in the questions, how to reduce stress and improve sleep quality? Some good ways to reduce stress and thus cortisol are: meditation, massage, yoga, exercise, socialising and good sleep. Group discussion has also been effective in reducing stress (13). See below for a list of tips on how to optimise sleep:

Conclusion on how stress and sleep affects weight and overall health

Cortisol does play a crucial role in increasing insulin. So managing your stress and sleep levels will ultimately aid in insulin regulation. This in turn will help you reach your health goals and manage weight.

1. Whitworth JA, Williamson PM, Brown MA, Colman P. Hyperinsulinemia Is Not a Cause of Cortisol-Induced Hypertension. American journal of hypertension. 1994;7(6):562-5.

2. Pagano G, Cavallo-Perin P, Cassader M; Bruno A, Ozzello A, Masciola P, Dall’omo AM, et al. An in vivo and in vitro study of the mechanism of prednisone-induced insulin resistance in healthy subjects. J Clin Invest. 1983;72(5):1814-20.

6. Bjorntorp P. Do stress reactions cause abdominal obesity and comorbidities? Obesity reviews : an official journal of the International Association for the Study of Obesity. 2001;2:73-86.

9. Vargas I, Lopez-Duran N. Dissecting the impact of sleep and stress on the cortisol awakening response in young adults. Psychoneuroendocrinology. 2014;40:10-6.