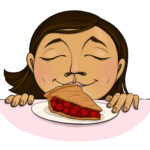 Food Cravings. When we get a food craving it means we have a strong desire or motivation to eat a specific food. Most people have experienced this at some point in their life. In fact, one study showed that 97% of women and 68% of men reported experiencing them. However, pinpointing the exact reason for these cravings can be complex and multifactorial. Some of the common causes of food cravings can be attributed to:

Physical conditions such as dehydration, nutritional deficiencies and hormonal fluctuations

Psychological eating based on feelings and past experiences

Cravings or hunger can be simply mistaken for dehydration, therefore drink some water and wait. If you are still feeling hungry then it may well be time to reach for something nutritious and within the dietary approach guidelines, you are following.

For many years it was thought that cravings were a feedback system telling us we need energy or nutrients. Although there has been some evidence to support this, we now know there is more involved. For example, if you were lacking salt in your diet you would probably crave salty foods, or certainly add to your meals. However a lot of people are not salt deficient because of the high consumption of processed foods. And due to adding salt to cooking but still crave salty, carb, fat-based foods. One study clearly highlighted that most people crave salty snacks or sweets high in carbs/sugar and salt when put onto a diet.

What was clearly identified from this study was the foods chosen were also high in calories.

One particularly interesting area of nutrition research is the impact that food can have of mood-changing neurotransmitters (chemicals). The main two being dopamine and serotonin. Dopamine, along with adrenaline/noradrenaline, is stimulated by protein-based foods which contain the amino acid tyrosine. These provide energy and alertness. This is great for those who have energy dips or wish to be active. Serotonin is also derived from protein-based foods which contain the essential amino acid tryptophan. If there is an imbalance of serotonin in the brain then mood could be affected and could lead to conditions such as depression. Therefore an increase in serotonin can help to alleviate depression, reduce pain and has a calming effect.

A word of warning, however, having a meal which contains a lot of carbohydrates, especially processed and high glycemic foods has also been shown to increase serotonin which causes drowsiness. Lethargy is also exacerbated by the increase in insulin in response to these types of carbohydrates. Eating meals which include a good portion of protein will help balance out any rise in glucose from the carbohydrates eaten.

As previously highlighted the reasons behind overeating or having cravings are very complex. Eating for psychological reasons can include social, lifestyle, economic and mental elements. These can then lead to eating for reasons such as boredom, habit, food addiction or emotions.

There has been research showing that cravings can be influenced by our memories or previous experiences rather than physiological feedback cues. Cravings can lead to habits which can be easily formed. For example, if you always have a biscuit with your cup of tea every day at the same time, this becomes more about the habit rather than the need for a biscuit. Also consider your social settings such as family parties, birthdays and holidays. Very often these include foods rich in carbs, sugar and salt. Feelings associated with these happy times create links to the types of foods eaten and again habits can be formed.

Using MRI scanning machines researchers have looked at the brains of subjects as they were instructed to imagine the sensory properties of favourite foods after a diet manipulation phase of a monotonous diet that they did not crave. Results showed that the neuroanatomy of subjects was similar to those of people who crave drugs. This has led to some researchers suggesting food addiction should be acknowledged as a mental health issue. However, this is not without some criticism and is currently still a controversial topic and beyond the scope of this blog to discuss in detail.

In addition, another study investigated a diet that consisted of only shakes for every meal for five days but met all the subjects nutritional needs. Results showed there were significantly more cravings compared to when they had a varied diet. This suggests that cravings could be more to do with psychology rather than specific nutritional deficiencies.

What can be frustrating for an individual is when they know what to eat to be healthy but still make poor choices. So why do people make these bad choices?

Well, it appears our emotional brain takes over from our rational brain. Surprise surprise, this happens when we are stressed out, hungry, sad, angry etc.  The ability to cope with situations where you are faced with the decision to have a good portion of protein with a side of vegetables as opposed to the pizza and sugary drink can be down to how capable you are at managing your emotions. What some call emotional intelligence.

Although you might feel better at that particular moment when eating sugary, fatty or salty foods, this way of coping could lead to long term health consequences. These include weight gain, diabetes and cardiovascular disease. As well as potential emotional issues such as depression, guilt, a drop in confidence and frustration of not achieving your healthy lifestyle goals.

The first step is to make sure you eat a nutrient-dense diet that provides enough energy. All the essential vitamins and minerals, essential amino acids, as well as omega 3 essential fats. This avoids any cravings your body may force upon you and improves mood.

The second step is to practice becoming more in tune with your emotional triggers when it comes to eating. The next time you “need or want” comfort food, stop and think about why you are reaching for it. Are you feeling sad, happy or angry. Identify your internal thoughts. What are you saying to yourself and what are the consequences/behaviours of these thoughts.

Understanding that your feelings are influencing your thoughts will help you become more aware of what is going on. To break these unhealthy habits all you need to do is practice the same awareness of when you are feeling negative. Then swap the thought process to “how do I want to feel, what positive thoughts am I  going to say to myself and what do I need to do to stay on track”. By doing this you will start to notice that positive behaviour changes will start to happen.