Within the ‘Introduction to the four main dietary approaches’ blog I briefly mentioned how the energy balance theory has its limitations. This blog is going to explore this claim and hopefully convince you counting calories may not be necessary!

Firstly I am just going to clarify we are not opposed to the first law of thermodynamics that total energy in an isolated system is constant and that energy can be transformed from one form to another but not created or destroyed. This translates to – if energy intake exceeds energy output for extended periods of time weight gain will be inevitable. Unfortunately it may not be as simple as tracking your energy intake compared to your expenditure, subtracting x and voilà WEIGHT LOSS! Accurately tracking calorific intake is a near enough impossible task and is arguably irrelevant when one considers the bigger picture of human physiology.

So let’s take this back to basics, what is a calorie? A calorie is defined as a unit which is used to measure energy. The calorie seen when one is referring to food is actually a kilocalorie (1,000 calories). A calorie (kcal) is the amount of energy required to raise the temperature of 1kg of water by 1oC. It is also worth considering sometimes kcals are expressed as kilojoules (kj) where one kcal equates to 4.184kj.

These figures may add up in a lab although when considering calories as an energy source for the human body there are some key assumptions that may not be true, arguably the main being:

* A calorie is a calorie (meaning every calorie gets metabolised the exact same e.g. 100kcals of extra virgin olive oil is the same as 100kcals of pure fructose)

* Intake and expenditure of calories are independent of each other

The first and arguably most relevant argument against these assumptions is that it is very clear when one eats in a deficit the body adjusts its basal metabolic rate (BMR) to match the new intake, meaning when you eat less the body will burn less (hence why weight loss stalls). This has been publicised in infamous starvation studies (1, 2) and more recently in weight loss trials (3) with reductions in BMR showing to remain reduced for >12 months following the weight loss (4) (explaining why weight gain follows weight loss in some individuals). This decrease in BMR also comes hand in hand with significant increases in ghrelin (hunger hormone) and decreases in peptide YY (satiety hormone) (5). Essentially the body wants to get back to its normal weight ASAP and does so by reducing energy output, increasing hunger and reducing levels of fullness… How to sustain weight loss is a topic for a later blog however so I will park this rant for now, although this is summarised below – 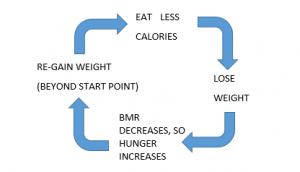 This vicious cycle goes round and round until the biological response to a calorie deficit is no longer tolerable through will-power alone. Effectively, the body acts as a scale with an individualised ideal ‘set weight’ consider this analogy –

* A child gets £20/month pocket money and every month despite there always being an option for saving, all £20 is spent

(The body gets 2000kcal/day and everyday 2000kcal energy is expended)

(If energy intake reduces to 1500kcal, the will not still expend 2000kcals)

* The child’s spending will reduce to £15 or maybe, if they were smart enough £12 in case further decreases in pocket money occurred

(BMR will drop to match the new intake, potentially further in anticipation of further drops)

One important factor in the notion of ‘a calorie is a calorie’ is how the body absorbs and metabolises calories from different sources, one driving force behind this is the gut microbiota.

The digestive system is home to hundreds of different types of microorganisms, the majority being bacteria with most regarded as ‘friendly’. These have several key functions including (7):

* Extraction of energy from foods
* Fermentation of fibre
* Production of short-chain fatty-acids such as butyrate, acetate and propionate
* Modulation of the immune system
* Vitamin synthesis

Levels of microbiota and ratios of difference species can be influenced by ingestion of probiotics. The WHO defines the term probiotic as “live microorganisms which when administered in adequate amounts confer a health benefit on the host” (8). They are found in both supplements and fermented food. Probiotics have been suggested to be beneficial as a biotherapeutic, although today we will focus on their potential weight management properties.

Certain probiotics may inhibit the absorption of dietary fat through suppressing lipase-mediated (an enzyme in the body used to break down fat to be absorbed in the intestines) fat digestion meaning lipase reduces its efficiency in digesting fat. This reduces fat absorption and increases faecal fat excretion (9). This research suggests certain probiotics may cause your body to absorb fewer calories (from fat sources). Furthermore probiotics are believed to increase circulating levels of glucagon-like peptide 1 which in-turn has been shown to have a favourable impact on energy expenditure, fat oxidation and satiety levels (10). Even in a state of a 1000kcal energy surplus (55% energy from fat) probiotics supplementation has been shown to minimise weight gain through reducing energy absorption in high fat conditions (11). One point to note is that dietary choices have a direct impact on levels of different microbiome, a varied diet leads to a varied microbiome (12).

Lastly bodyweight seems to be associated with the balance between two types of bacteria in the gut (bacteroidetes and firmicutes) with obese individuals having a decreased proportion of bacteroidetes compared to lean individuals, indicating obesity has a microbial component (13) which may arguably be genetic or could be influenced by ingestion of probiotics. Overall research into the microbiota is a fairly unexplored concept given its magnitude and is something which needs future attention (7).

Another factor which plays a large part in weight regulation and one’s overall health profile is insulin resistance. This requires a blog all to itself though, which is due in a fortnight’s time!

Considering these factors, for most individuals weight regulation is clearly is not as simple as ‘a calorie is a calorie’ and this may be the downfall for many aiming to lose weight.

I would advise against counting calories to make losing weight a more enjoyable, less obsessive experience with heightened success. I would recommend educating yourself on the different dietary approaches and choose one you can sustain as a lifestyle approach, monitor and adjust accordingly!

Any questions, feedback and/or suggestions would be most welcomed, please email me at –

1. Harris JA BF. A Biometric Study of Human Basal Metabolism. Proceedings of the National Academy of Sciences of the United States of America. 1917;4(12):370-3.