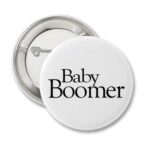 The number of older adults and life expectancy in the UK is increasing. This is partly due to the rapid rise in births between 1946 – 64 and overall improved medical care (Davies, 2016). It has been acknowledged that the NHS is in crisis over funding and provision, despite this there is currently a greater need for healthcare as the population ages (Appleby, 2013). There is a necessity for suitable interventions to help this population remain as healthy as possible into old age, thereby reducing the burden on the NHS. This blog will highlight the healthcare needs of baby boomers with regards to the increased risk of diabetes.

Who are the Baby Boomers?

Baby boomers are defined as adults between the ages of 56 and 74 by 2020. The phenomenon happened after the second world war, between 1946 and 1964. Figure 1 shows there was a rise in births from 1946 and 1947 and again in the late 1950s reaching a peak in 1964. These two different baby booms are important considerations given that the two cohorts experienced different lifestyles due to various economic and social factors. Because of post-war austerity those born between 1945-49 experienced rationing and differences in education accessibility, however, they did benefit from a booming job market with a strong economy with the majority staying on at school or going to university.

This contrasts with the second baby boom cohort born between 1960 –64, which were born in a period of economic growth and better education from secondary schools, however, the job market was in decline hitting recession at the end on the 1970s. The different lifestyle environments of these two cohorts have had strong influences on an individual in terms of life chances, expectations of job opportunities, the welfare state and lifestyle in general (Davies, 2016). 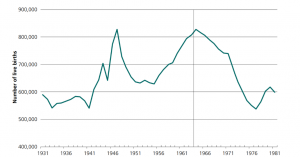 Given the increased number of births during 1946-64 the impact on an ageing population can be seen in figure 2. This compares the structure of the population in 2018 with the projected age structure in 2043.

According to Appleby (2013) during the next 25 years, as these baby boomers grow older, this generation will have a significant impact on social and health costs. But other factors such as physical, mental, lifestyle and retirement factors will have an impact.

Figure 2: An increase in the number of older people in the UK 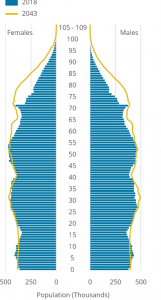 Figure 3: Adult overweight and obesity prevalence (BMI), by age and gender in 2018 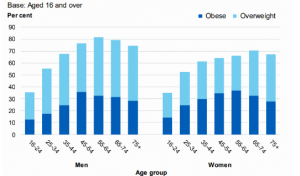 Using waist measurements are more of a useful way to measure future health risk than just BMI alone. This is because BMI does not account for differences between muscular physique and body fat. It also fails to account where the fat is distributed if the fat is stored centrally above the waist (most detrimental) or below the waist.

Figure 4: High and very high waist circumference in adults, by age and gender in 2018 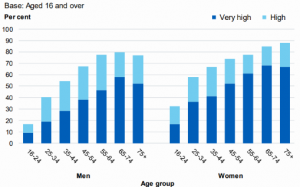 It has been shown that being overweight or having a very high waist circumference are risk factors for type 2 diabetes and that both types of diabetes (Types 1 and 2) are a leading cause of avoidable mortality. Diabetes also increases the risk of cardiovascular disease and can worsen other risk factors such as high blood pressure, smoking, obesity and dyslipidemia (abnormal blood fat levels).

In figure 5 it can be seen that 8% of men and 6% of women reported doctor-diagnosed diabetes in 2018. Prevalence increased with age and was greater among males than females. The proportion of adults with doctor-diagnosed diabetes increased between 1994 and 2018. There are some yearly fluctuation from 3% to 8% among men and from 2% to 6% among women. In absolute terms, the rise over this period has been largest among adults aged 65 and over (NHS Digital, 2019b).

Figure 5: Proportion of adults with doctor-diagnosed diabetes by gender 1994 – 2018 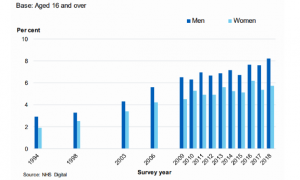 The number of older adults and life expectancy in the UK is increasing. This is partly due to the rapid rise of the baby boomers born between 1946 – 64. This subgroup of the population is showing the highest risk factors for diabetes and CVD, which is strongly associated with an increased BMI or very high waist circumference. Baby boomers need to be provided with structured education and behavioural support to improve their health and wellbeing whilst also reducing the financial burden of the healthcare system.

Davies, S.C. (2016). Annual Report of the Chief Medical Officer 2015. On the State of the Public’s Health, Baby Boomers: Fit for the Future London: Department of Health.